These are books that I have read. I remember more when I write in a book and the review it afterwards. Hope you enjoy. Feel free to comment 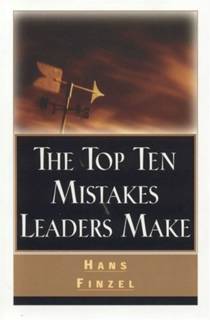 The story is told of the college football coach called practice to a halt to "chew out" one of his big freshmen tackles for making a stupid play. Head bowed, the big tackle stood in silence as the coach called him every kind of name, topping off the blast with, "What's your IQ anyway?" Startled, the tackle looked up, thought for a moment, and then answered, "20-20."

Many leaders could avert “stupid plays” if they would take some time and read The Top Ten Mistakes Leaders Make by Hans Finzel. Finzel states his purpose for writing this book as to help people who find themselves called to lead and are a bit apprehensive about blowing it. He states that the average leader faces at least five problems in learning how to lead. First, leaders often replicate the poor leadership habits they have observed in others. Second, leaders often lack basic skills for common leadership demands. Third, leaders lack good models and mentoring. Fourth, today’s leaders lack formal training in leadership. Fifth, today’s leaders suffer confusion over the conflict between secular and biblical leadership value.

Finzel then takes ten chapters, delineates ten different mistakes, and offers solutions for each. The first mistake, labeled as the number one leadership hang-up, is the top-down attitude. He states this even more convincingly when he writes, “I believe the number one leadership sin is that of top-down attitude autocratic arrogance.” This top-down approach to leadership is based on the military model of barking orders to weak underlings. This approach shows up with abusive authority, lack of listening, dictatorship in decision making, and an egocentric manner.

The second mistake that Finzel deals with is that of putting paperwork before peoplework. He observes the greater the leadership role, the less time there seems to be for people, and the more important peoplework is. He reminds his readers to remember that people are opportunities, not interruptions.

The third mistake is the absence of affirmation. Finzel reminds his readers that everyone thrives on affirmation and praise and that leadership has as much to do with relationships as with getting things done. He then challenges aspiring leaders to learn to read to varying levels of affirmation that those one leads needs.

Dealing with mavericks is the next mistake Finzel covers. He reminds his readers that mavericks often save organizations from the slide toward institutionalism. He also observes that most large organizations will ‘kill off’ mavericks before they can take root. He then challenges leaders to learn to recognize truly useful mavericks.

The fifth mistake Finzel addresses is that of dictatorship in decision making. He challenges leaders to move past the I know all the answers” attitude that stifles the value of individuals. In this chapter, Finzel contends the one who does the job should decide how the job should be done. In Finzel’s opinion, ‘flat’ organizations are the model of the future. Finzel concludes this chapter by saying, “When the best leader’s work is done, the people will say, ‘We did it ourselves!’”

Finzel then deals with the issue of delegation. Finzel observes that nothing frustrates those who work for the leader more than sloppy delegation. He states that there are several reason leaders do not delegate: fear of losing authority, fear of work being done poorly, fear of work being done better, unwillingness to take the necessary time, fear of depending on others, and lack of training and positive experience. Finzel offers five essential ingredients for clean delegation. First, faith in the one to whom you delegate. Second, release from the desire to do it better yourself. Third, relaxation from the obsession that it has to be done the leaders way. Fourth, patience in the desire to do it faster oneself. Finally, vision to develop others with ones delegation freedom.

Finzel labels the seventh mistake as communication chaos. He states that communication must be that passionate obsession of effective leadership. He observes the bigger the group, the more attention must be given to communication and when left uninformed, people tend to dream up wild rumors.

In the eighth chapter, Finzel deals with the mistake of missing the clues of corporate culture. He defines corporate culture as “the way insiders behave based on the values and group tradition they hold. Finzel offers six suggestions to deal with this conflict when it arises. First, as a leader, listen to win. Second, an effective leader will love diversity. Third, continually look for unity. Fourth, learn to like those who are different. Fifth, learn to separate methodology form theology. Finally, long for God’s Glory.

Finzel, in the ninth chapter, discusses the issue of mentorship. In essence, Finzel educates leaders how to prepare to transition leadership to another. He states that leaders make two common mistakes. Leaders tend to stay too long in a position rather than not long enough and leaders who stay too long do much more damage than those who do not stay long enough do.

In the final chapter, Finzel states that many leaders fail to focus enough on the future. It should be the chief preoccupation of the leader to provide vision.

The effectiveness of this book is based on the practical application that Finzel provides for each issue he raises. Not only does he effectively identify the problem, but he also provides direction to avoid the mistakes before they arrive. At the close of each chapter, Finzel provides “Powerpoints” which provide concrete actions to alleviate or avoid each of the ten common mistakes identified.

An additional distinction of Finzel’s book is the Biblical principles he alludes to throughout his writing. This is especially appealing to pastors and leadership in churches. Each of the mistakes Finzel identifies is also prevalent in churches and is not exclusive to the business world. As a pastor, the writer of this paper appreciated the insight and frankness of Finzel’s book.

This is a book that could be recommended to any leader, church or business, novice or experienced, or laymen or professional. It has a tremendous amount to offer each reader.

Pretty nice post. I just stumbled upon your weblog and wanted to
say that I have really enjoyed browsing your
blog posts. In any case I will be subscribing
to your rss feed and I hope you write again soon!

Take a look at my page; chapter 13 bankruptcy florida

Simply want to say your article is as surprising. The clearness
in your post is just cool and i can assume you're an
expert on this subject. Fine with your permission let me to grab your
RSS feed to keep updated with forthcoming post. Thanks
a million and please continue the gratifying work.

This text is invaluable. Where can I find out more?


Here is my web-site: Healthy Diet

Immediate Quickpwn to the bootloader information you
just downloaded, and push the blue arrow button to carry on.
It might take you a while (It took me about twenty minutes to backup 4GB information).

Even though you might disgust relocation and varying to firmly other
places, but sometimes, you only can. In this Cosby Sweater Project, each episode offers different kinds of game
to recreate his magic loud shirts. Nervous or ill-at-ease people
make others feel uncomfortable.

I was pretty pleased to uncover this web site. I
want to to thank you for your time for thiss particularly fantastic read!!
I definitely really liked every bit of it and I have you book marked
to look at new stuff inn your website.

Solution therapeutic methods, like acupuncture, are says to be valuable as clearly.
Treating a chronic yeast infection is hard, difficult, and time consuming but with using all natural remedies to yeast infections it can be easy.

Honey is also used by some people, as one of the natural cures for yeast infection.

I have also found that the organic beauty products that I use show better on my skin and seem to last
a lot longer than synthetic stuff. How energy-intensive
are the various processes used to make the finished product.
Actually, there are no "toxins" in cellulite, that's a complete production made up by promoters.

Mt Kilimanjaro is more than 240 miles, and on a clear day you can see
this huge mountain of snow with the crown, sitting on the border of Kenya.


My page; how to install clash of clans on mac

Start off with checking the metal tracks keeping the wheels in case
of a rolling door for obstacles or blocks. You have
plenty of options to choose from as the range is quite large.
Hard bargaining would be the need of the hour.

Feel free to surf to my web blog; http://test.Tech-logical.com

first, you have to get results quickly and two, you have to
make your workouts last a short amount of time.
You have a fresh slate to become the person that you always wanted to be.
Don't fall prey to any of the fat reduction pills, drugs or medicines.

fantastic points altogether, you simply received a emblem new reader.
What might you recommend in regards to your publish that you just made a
few days in the past? Any sure?